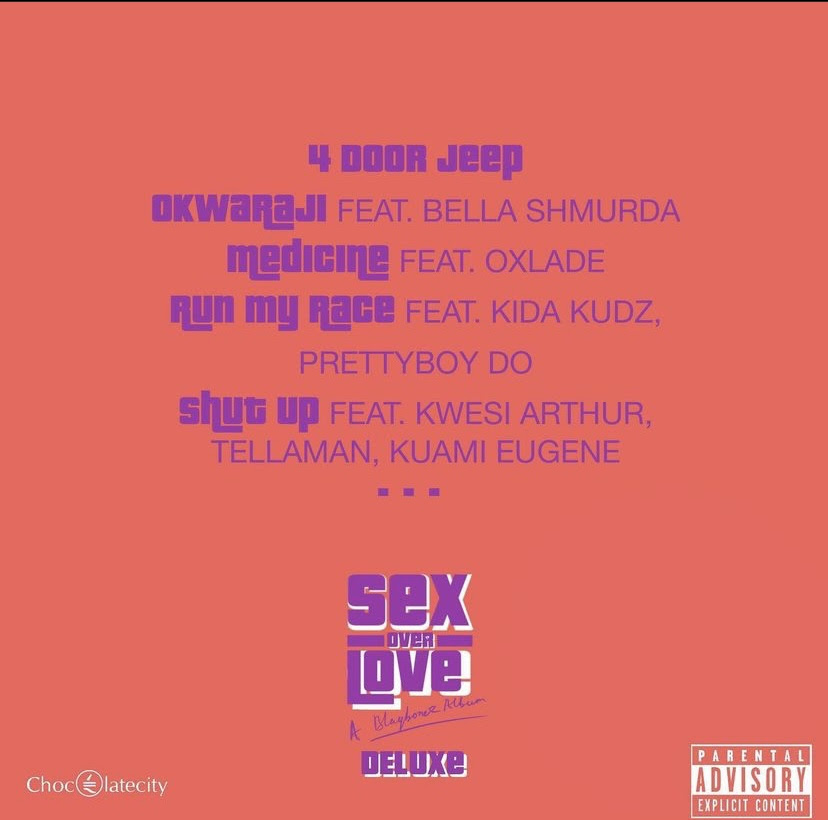 Blaqbonez surprised fans when he announced the deluxe version of his highest charting album ‘sex over love’ which peaked at Number One after its release in April, 2021.

Blaqbonez ‘ Sex Over Love Deluxe Album Is Here! After the successful release of Sex Over Love, the debut album by rapper, singer and songwriter, Blaqbonez, which peaked at #1 on Nigeria’s Apple Music’s Top Album Charts, with the lead single Bling also claiming the #1 spot on Apple Music Nigeria’s top 200 chart, the Chocolate City Music star has now released the deluxe edition of his artistically daring and provocative “Sex Over Love” album.

Consistent with Blaq’s penchant for concept-driven musical projects, ‘Sex over Love’ follows a central theme; broaching the topics of sex and love from a number of unique angles. With Blaq leaning heavily into his Afrobeats, Trap and Hip-Hop influences on songs like ‘Don’t Touch,’ ‘Bling’, ‘Fendi’ and ‘Faaji’, it is another display of his versatility and willingness to experiment with, and diversify his sound. But it’s not all vibes and party music this go-around as Blaq is intentional about feeding his core hip-hop fan base with tracks like ‘Heart Breaker’, ‘Oparaji’ and ‘Zombie’.

On the deluxe version of the project, Blaqbonez invokes a strong continental impulse across all tracks. It consists of 5 new tracks with electrifying features from Oxlade, Bella Shmurda, Kwesi Arthur, Kuami Eugene and other amazing acts.

The deluxe album is set to re-affirm Blaqbonez’ position as Africa’s finest pop star and further convey his Sex over love gospel. Stream Sex Over Love Deluxe and share with us your favorite tracks off the album.

Available on DSPs, Listen To ‘Sex Over Love Deluxe’ HERE. Also Enjoy below